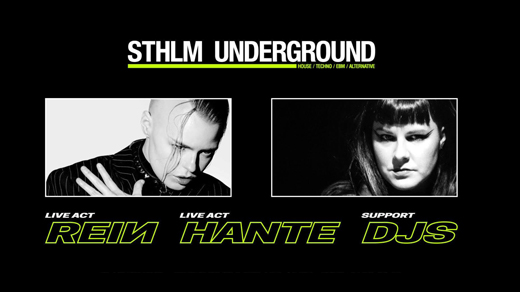 The artist, producer and record label owner REIN made her debut with the self-titled EP 2016. Together with "FREEDOOM" 2017, she breathed new life into the Swedish electronic music scene by mixing genres to create her own sound.

In just a few years, REIN has become an icon and consolidated her position and status as a musical pioneer.

Hante. AKA Hélène de !oury is a one-woman powerhouse of electronic might and pulsating energy.

Trough her Parisian darkwave, she offers a melancholic and haunting vibe that permeates every track of her discography.

Hante. is a distinctly enigmatic prospect; glacial, assured and compelling.

Her latest album, FIERCE, released in 2019 on her own label Synth Religion and Metropolis Records for North America reveals a mix of strength and vulnerability that she delivers around the world through her powerful and mesmerizing live performances.